A number of memorials throughout Belgium and New Zealand bear the
name of Charles Davey Harris.

The Methodist Church at Omihi, North Canterbury, sadly mourns the loss of one of its brave heroes and faithful sons. Charles Davey HARRIS was reported killed on October 4, 1917, and the news of his death caused widespread sorrow and a keen sense of great loss in the community where he was well known for his sterling and manly character. He was born well-night twenty-eight years ago in a Methodist home in North Loburn, where he spent the early part of his life. He attended the Methodist Church and Sunday School at Raithly. As a young man he went to live with Mr J. Stalker, of Woodend, on whose farm he laboured until, with his parents, he moved to Omihi, where he lived until his enlistment and departure with the Twenty-fist Reinforcements. In that godly Methodist home in Omihi and the community where he lived, there hovers around the name of "Charlie" a halo of sincerity and a memory of manly virtue that is seldom equaled and never surpassed. He was of a quiet and thoughtful disposition and one whose character faithfully reflected the beauty and excellence of his Redeemer and Example. Our Church can ill afford the loss of such men, but such are the ravages of this cruel war-god that upon his alter our bravest and best pay the supreme price of their devotion to duty. We rejoice that in the testing hour he failed not, but was faithful to his country, home and King, even upon death. With our deepest sympathy and prayers, we remember his bereaved parents and kindred before the Throne of Grace where there is a healing for all our wounds and a solace for all our woes.
~ View News Clipping ~

A social was held in the Omihi goods shed t bid farewell to Privates C.D. Harris and A.W. Stackhouse, of the 21st Reinforcements and to welcome home Trooper D.A. Little, who went away with the main body. Canon Purchas presented the departing soldiers with a Maltese cross, dated 29.12.18, as a mark of the esteem in which they were held by the residence. The soldiers suitably replied. Songs were given by Mrs Doyle and Miss Stackhouse, Messrs Doyle, R. Dalton and J.R. Dalton. Mrs Cole and Mrs Davies supplied music for the dancing.
~ View News Clipping ~

I do not know how Harris was killed as I had left the Company at the time of his death, but I think it took place at a dressing station at Ypres. He had been a Platoon Stretcher Bearer for some time also a company runner, either job which requires a responsible man. Harris was one of the best men in my Company and words cannot express what I would like to say about him, he was always willing to lend a helping hand to a comrade and even when he had just finished one strenuous job would start on another if necessary. I am sure the news of his death was a blow to all his mates. I myself was exceedingly sorry to hear of his death as he had done me a really good turn, and as a runner went through many a hot corner. My sincerest sympathy is with his people.
Company Sergeant Major Noonan, Fernside, Rangiora.
(Noonan returned to New Zealand from the war, after being ill with pleurisy for some time at Brockenhurst Hospital)
~ View Note ~ 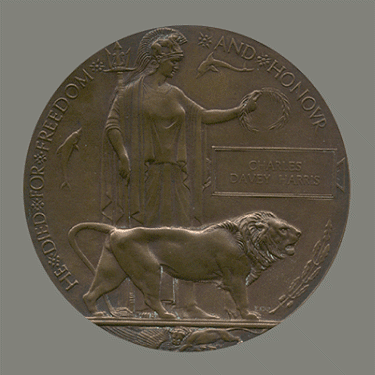