The mug was first gifted to Charles Harris, born 23 February 1866. It has then passed down through the generations. 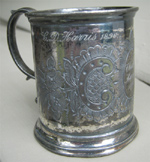 On 24 October 1917
at their Omihi farm
Charles and Emma Harris
received the following telegrams:

"Regret to advise you cable received
this day reports that 33719 C.D. Harris killed in action October 4th. Please
accept my sincerest sympathy in the
loss which you and New Zealand have suffered.”
J. Allan
Minister of Defence
~ View Telegram ~

"The Governor General is commanded
by the King to assure you of the true sympathy of his Majesty and the
Queen in your sorrow."
Sir Arthur Liverpool
Governor General
~ View Telegram ~

"I am directed to convey to you an impression of their Excellencies
sincere sympathy in the sad loss
which you have suffered.”
Gavin Hamilton
Private Secretary
~ View Telegram ~

5 September 1889, Charles Harris married Emma Cock at Northam, England. On the 15 September, they left Plymouth, England with Charles parents Edmund and Fanny HARRIS, sailing for New Zealand on the 'Ormuz'. On route, they stopped over in Melbourne, after which they continued their voyage on the 'S.SManapouri', arriving in New Zealand on the 5 November 1889.

Charles Davey (Fanny's brother) had earlier travelled to New Zealand and purchased a block of land from the Deacon family at North Loburn. It is thought he had invited Edmund and Fanny Harris and their son Charles and his wife Emma to come to New Zealand to help work on the land.

On the 22 May 1890 Edmund and Fanny took up residence at the 'Deacons' in North Loburn, where they helped farm the property, later purchasing some of the land. Charles and Emma also lived there with them. The farm is now part of the Ashley forest and their particular block is now known as 'Paringa'.

On the 25 August 1890 at Rangiora, Emma and Charles had their first child, Charles Davey Harris.

Upon being christened, Charles was gifted a Christening Mug which had previously been presented to his father on his christening.

In later years, Emma and Charles had four other children, these being; Helen, Fanny Eliza, James Edmund and John.

The family attended the Raithby Methodist Church and Sunday School, at North Loburn.

At the age of five Charles attended North Loburn Primary School, where his teacher was John Sayle Dalby. He did not attend high school, as he remained at home in those later years, working on the family farm.

In 1907, Charles (commonly called Charlie) then aged 17 and the family moved to Rangiora after his mother had suffered a period of ill-health. During the next six years they resided at three different locations, these being Ashley, High Street and Ivory Street. During this period, Charles went to live with Mr J Stalker of Wooden and on whose farm he worked, until with his parents he moved to Omihi in 1913.

Charles was 23 when he and his parents moved to "Fernbank" at Omihi, where Charles worked for his father. Fernbank was part of the original Glenmark estate. In these later years, Charles became engaged to Ethel Stalker, the youngest of twelve children.

On 4 August 1914, war (First World War) was declared. 19 September 1916, Charles then aged 26 enlisted with the Canterbury Infantry Regiment, where he held the rank of Private No.33719. Fanny (Charles sister) talked how her brother did not want to fight, but instead serviced his country as a platoon stretcher bearer and later also as a company runner. At the time of enlisting Charles army records showed he was fit, 5' 11" in height, 168 lbs in weight, black hair, grey eyes and the top of his left thumb was missing. 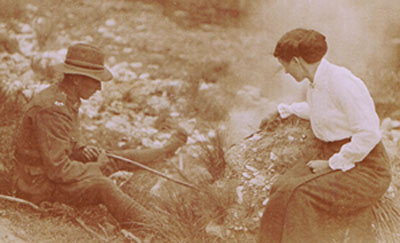 Charles with his sister Helen prior to departing for England

On the 19 January 1917 Charles left Wellington for Devonport, England on the 'Ulimaroa', this being one of two ships heading that way with 2,068 men on board. He disembarked at Devonport 27 March. Left for France 28 May and then onto Belgium. He was killed in action, at Ypres, Belgium on 4 October 1917. At the time of his death, Charles was 28 years of age.

On 4 October 1917, Charles platoon was involved in one of the main offensives, this being the battle of Broodseinde. The scenes of battle for the New Zealanders were two hills, Abraham Heights on the eastern slopes of Gravenstafel and Bellevue. On that day, Charles had been to the front lines some seven times, carrying out injured soldiers to a dressing station. He was at a dressing station when a shell struck, instantly killing him, the Battalion Chaplain and other stretcher bearers. He was buried by the Wellington Battalion Chaplain on Abraham Heights. His grave is only known to God.

Ethel STALKER later went on to marry Edward (Claude) Pateman, a farmer and they lived with Ethel's sister Ada at the 'Beach House' at Woodend Beach. Ethel never had children, due to her age. On occasions, Fanny Whyte (nee Harris) and some of her children stayed on holiday with Ethel and Claude. Ethel died in 1960, at the age of 70.

Charles was awarded the British War Medal and the Victory Medal. 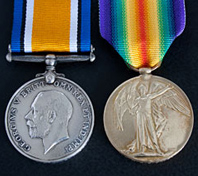 * The header picture is of the 'Deacons' homestead at North Loburn